It was easily the coldest day all winter so far but there was a nice swell in the 4-5ft range from the south with winds light early. The forecast was swell would stick around but the winds would increase from the South so it was a no brainer to take the bank in front of the Southend Surf Club. There were plenty of closeouts but there were a few nuggets. It was all a matter of being in the right spot at the right time, choosing the right sized one and one that hit the bank at the right angle. Need a degree to go surfing these days!!! 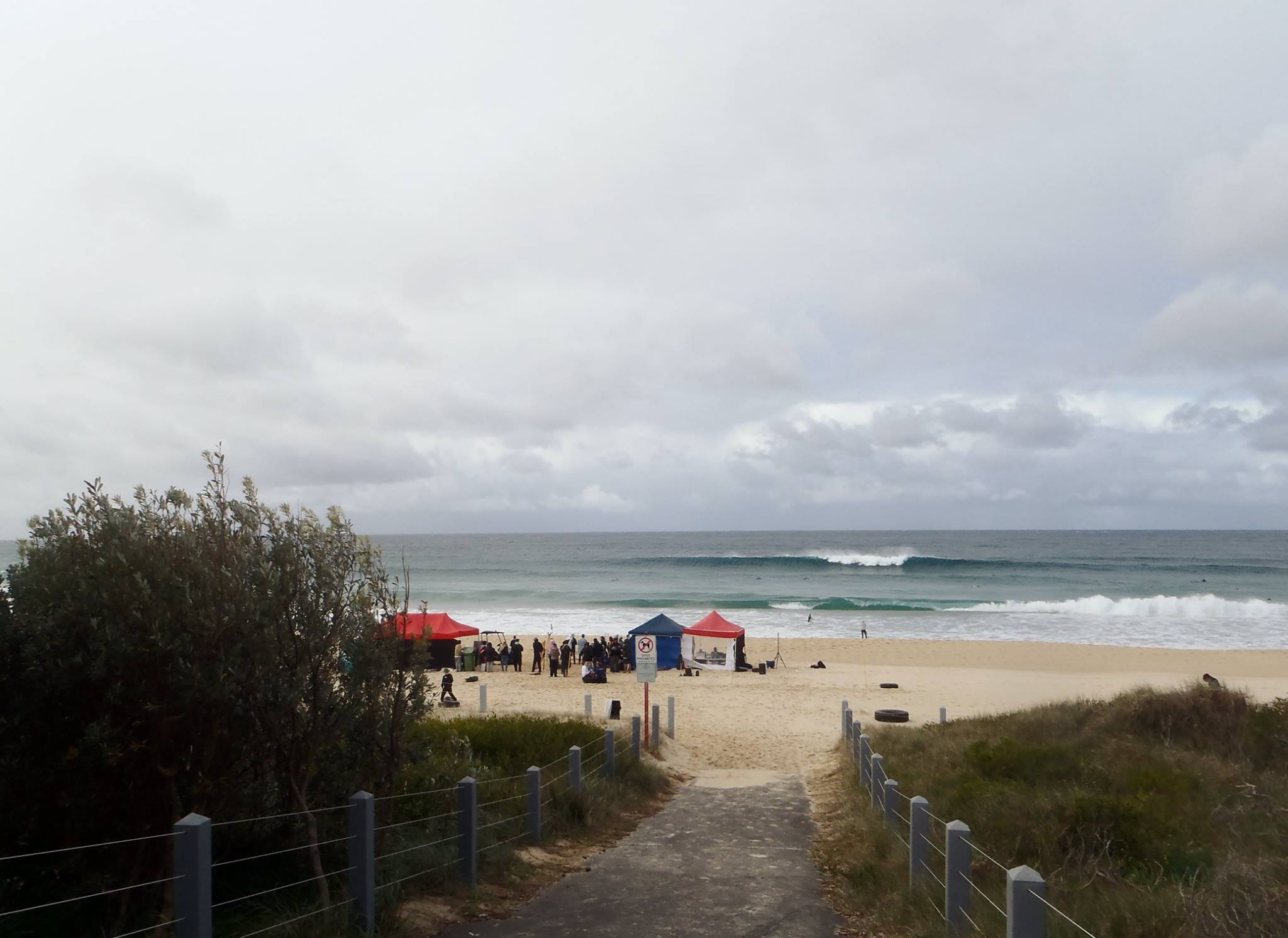 The line up. Pic Murray Cooke

The teams were all primed and in Round 1. This was a tag team heat and Blake Thornton went absolutely ballistic. He just ripped his 3 waves apart. He scored 25.17 from a possible 40. His 1st wave was so rad, his powerwave was equally as sick. Other highlights included Cory Barron (Blue) riding some long tubes, Doobs (Blue)  was all style and Joey Michael (White) was waiting for the big ones and ripping. After the 1st heat Red were 1st on 58 2nd – Blue 54.50 3rd White 46.83 and Yellow 4th 46.0

Round 2 – Tag Team again and young Luke Johnson (Red) and Chris ‘Bluey’ Riley (White) came out swinging. The boys found 3 great waves each finishing with 20+ point scores. But this was White’s heat. Nick Kennedy & Luke Fletcher both scored 17.67 and despite the best efforts from Dylan Grujovic 16.83 for the Red team and Emma’s 12.83 and Monty’s 26.17 for Blue White took home the chocolates in R2. Monty’s waves in this heat were ridiculous. This kid made it look effortless. 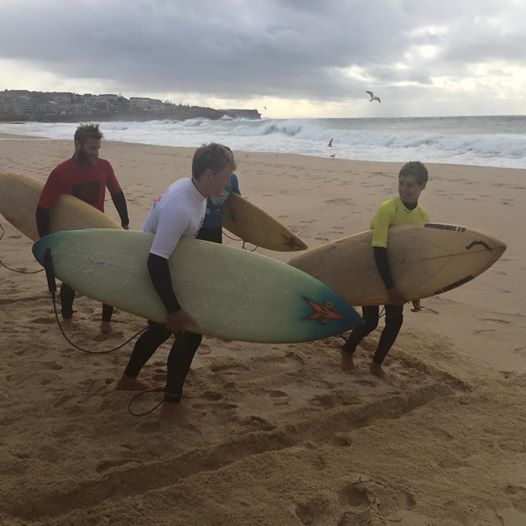 Heat 1 about to kick off . Surfers – Blake, Ritchie, Cory and Zac

Round 3 – Another tag heat. This one was the tightest heat of the 3 tag heats. Only 3.5 points separated 1st -> 3rd day. It was as if someone had turned off the tap with some big lulls in this heat. But when the waves came through they had picked up a foot or 2. The wind had swung a little more southerly adding more chop on the face of the waves. Jamie Reid and Brock Butcher got the Red team off to a great start as did Murray Cooke (White) and Matt O from Yellow. Matt O turned back the clock picking off some nice lefts and scored 23 /40 from his 3 waves. By far the best score of the heat and 1/2 his teams points for the heat. Con Parris and Karl Richards snuck a few but Tom Kurz and Jackson Giles snuck a few to give Yellow it’s 1st heat win for the day.

So before the Power Final there were only 12 points that separated 1st to 3rd. Karo’s White team held a 5 point lead over the Lawerence brothers Red team with Brad’s Blue team a further 7 points back on 211.17

Heat 1 of the power surfer final was taken out by Red surfer Blake Thornton. Dominating from the start Blake went mental putting it all on the line. Every ride was as good as the previous. There was a countback for second between Matt O (Yellow) and Max McGuigan from White. Matt takes second with Max 3rd and only 0.13 behind Mitch Kennedy (Blue). Red re-takes the lead 239. White 2nd on 235 and Blue with some work to do 221. Yellow are too far behind to win but can do some damage as the spoilers. 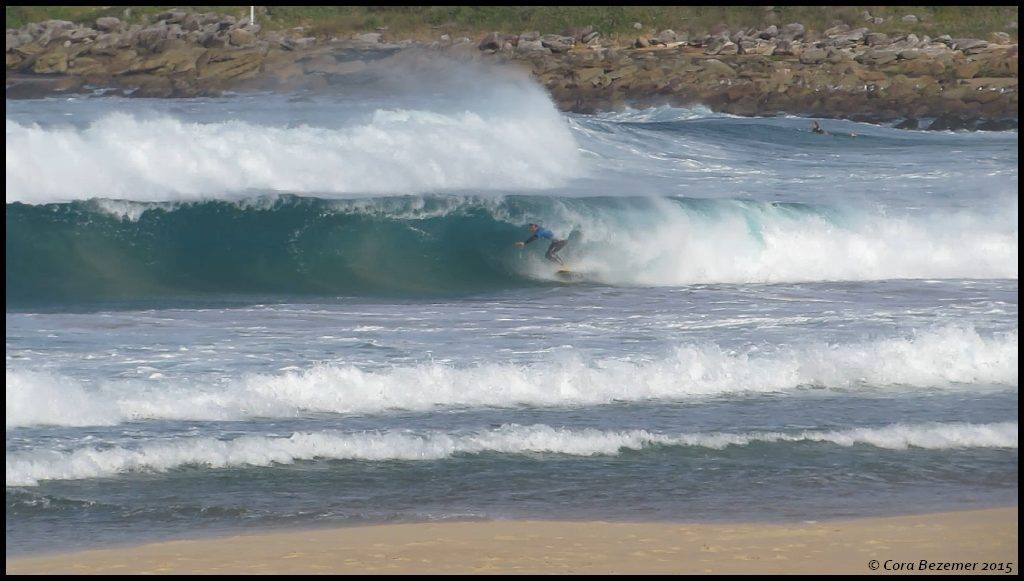 Monty pulling in during the Finals

2nd Final – Another close one with Karl Richards from the Blue team taking off on some bombs. With 2 good ones in the bag Karl it was left to the rest of the field to play catch up. Wez (yellow) had one good one but couldn’t find another and finished 2nd. Joey Michael (White) only 0.17 behind 3rd and Dylan from the Red team 4th. Red were still in front on 249 White 2nd on 247 and Blue back in it on 243.

3rd Final – This heat had it all. Big barrels big turns and big heart shown by the boys pulling into some big heavy closeouts. Monty picked off a screamer with his waves starting at south middle and ending up at the skatepark. wack after wack after wack. He did have to work for it through with the Kennedy brothers Nick and Luke getting some gems too. But Monty closed it out right before the buzzer and took the win for the Blue team. Luke (yellow) 2nd and Nick from White 3rd. Ronnie from the Red team had probably drowned a few too Mexican Lager’s finished 4th. After this heat Blue took the lead on 265 with Red and White now equal on 259. 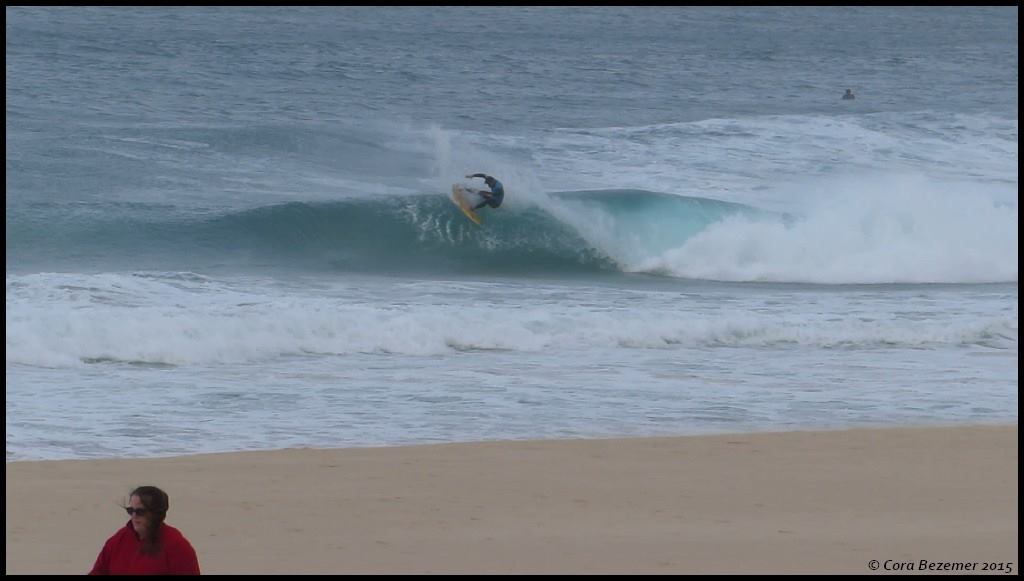 So after a full day of surfing It would come down to the last heat to see who would take out the 2015 Baxter trophy. Luke Johnson (Red) Simon Sheps (White) Doobs ( Blue) and Zac in Yellow. Some big sets were rolling through and all the boys had a go. Luke and Zac went big on some heavy closeouts. Just unable to stick the big moves. Sheps and Doobs used their experience knowing that you had to stick em to score big. Just be patient and wait for the right one. With about 5 to go Doobie found a nice open-faced wave and just went about tearing it apart. 2 very nice reos and big floater to finish it off. Sheps had one last go on a double overhead beast style arching off the bottom but the thing just hit the bank and slapped Sheps down. Doobs took 1st, Sheps 2nd Zac 3rd and Luke 4th. 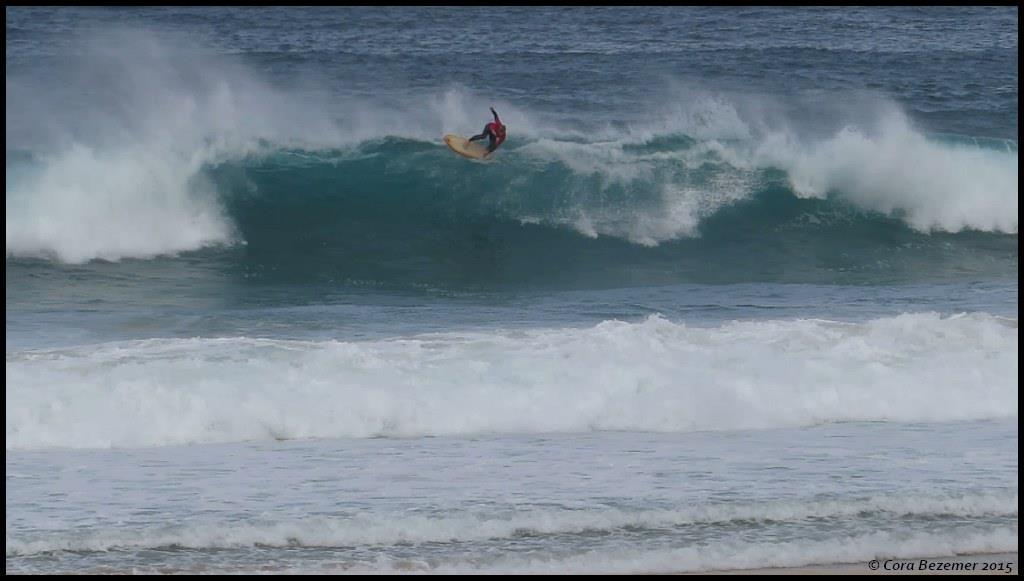 The 2015 Baxter Champions are 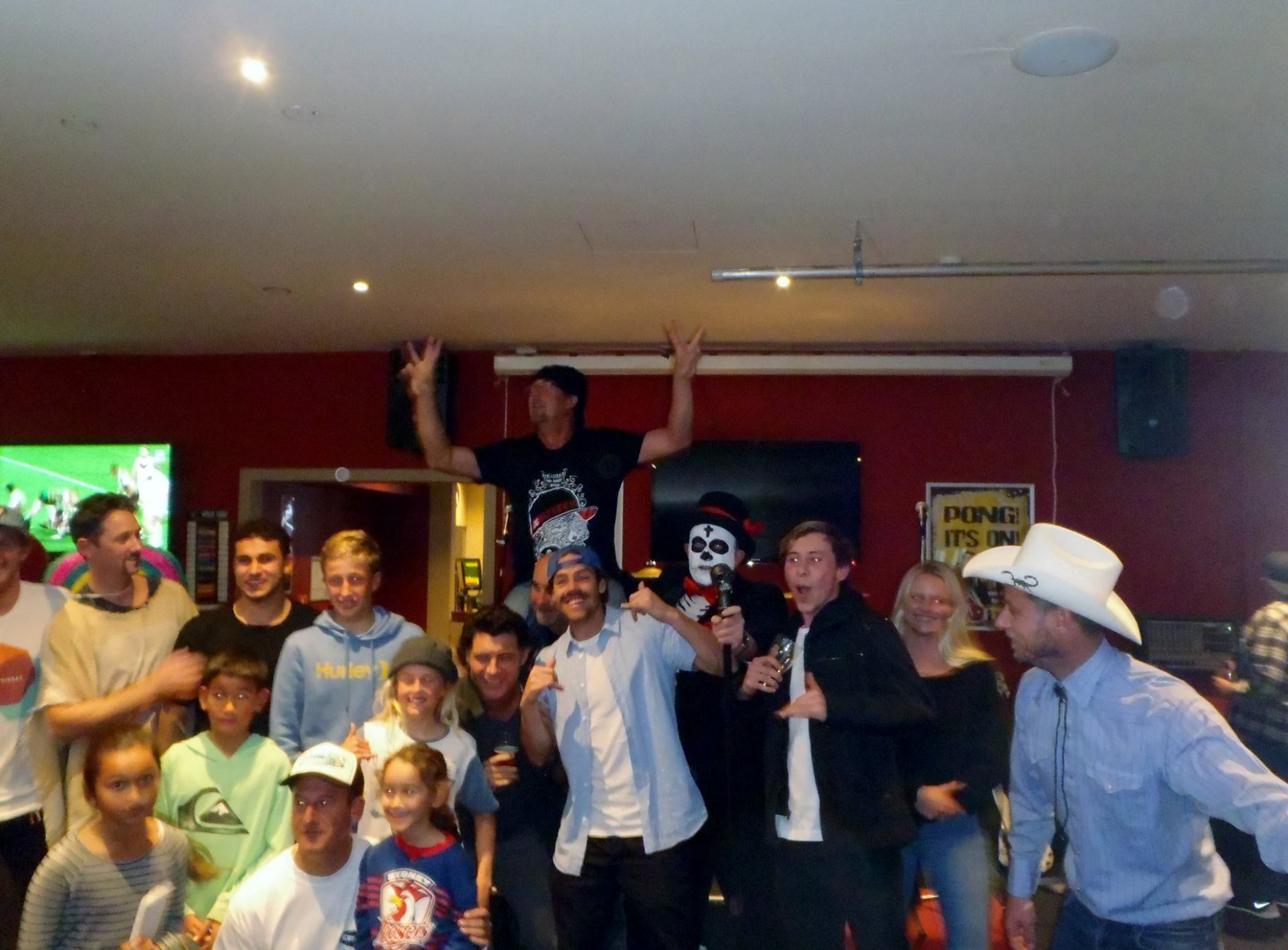 King Koolis celebrating with his team.

Blake Thornton took out the Sean Sweet Manoeuvre of the day. His 1st wave and the 1st wave of the contest saw him tear the wave to bits with some massive turns. It wasn’t one turn that stood out it was all of them. The judges had to check that he wasn’t riding his thruster. Congrats and Blake won a Carve pack for his troubles.

The perpetual Adam Bishop award for the layback of the day was won by Dylan Grujovic for his turn in Heat 2. Thanks to Semo for his amazing speech about Bisho and Paul Baxter on the night. It was good to hear some of those amazing stories about the 2 from a guy who spent a lot of time with these 2 legends.

Young Luke Johnson won the Charger of the Day award for his fearless approach on charging the biggest baddest closeouts of the day. The crowd loved it and so did the judges. Well done Luke

After an epic day everyone headed up the Sands to celebrate the day. There were some awesome costumes, the mexican food was beautiful and the $5 Coronas were going down like water. The party continued well into the night with watch local lads from Flick the Bean performing some epic sets.

Thank to this events major sponsors – Sands Hotel. Without the support from Gina and the crew this event would not be possible. Also thanks to all our other sponsors. The guys from Mad Mex Maroubra for the awesome Grande Melts at lunch, Mark Thompson from Eastern Tiling – 0412 243 527, Maroubra Surf Skate and Carve. I would also like to thank our judges John Semo, Cam, Frog & Shatz who gave up their time on the day to judge. Also thanks to Nina from NLP Photography for taking pics on the beach and at the Sands.

There are a swag of great photos on our FB and Insta account. Go and check them out. It was an amazing day and we hope you all had a blast. Bring on 2016