The 2013 Surfing NSW Southside Junior Titles were held on Saturday May 4 in small but clean conditions at Maroubra. Compared to previous years there was less competitors but that didn’t impact on the quality with some great surfing on show and with Southend surfers featuring heavily throughout the event. Top heat score for the day was in the u18s with Monty Tait posting 15.16 in round 1. Special mentions go to Lucas Bersot in the u12 boys who caught his 10 waves in about 8 minutes to win his final and  to  Arabella KeatingFollas (U14) of Bronte who edged out Tara Bellaiche and Gretel Tamaszuk (U18) to win in the junior girls final. And by far the best paddle-battles of the day were had in the two heats that featured Tye Koolis and Max McGuigan – if only they there as keen to find a barber as they were to scratch their way into any wave that dared raise it’s head. Best wetsuit of the day easily goes Jack Pacey who looked like he rolled Scuba Sam. 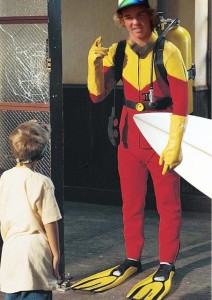 Results of the day and the team that will represent Sydney Southside at the state titles in July are in here. On a serious note, we gotta say a big thanks to Paul ‘Moff’ Moffat who after many years is stepping down from organising the Southside event. And in breaking news, it looks as though Matt ‘Hickey’ Lawson (the grumpy guy you see in the judges tent at Southend comps) will be taking up the reins – good luck with that bruvva!