Last weekend Southend competed in the 30th annual Kirra Teams Challenge on the Gold Coast, placing 20th out of the 32 clubs, just 3 points out of the top ten and apart from North Avalon the best placed of any of the Sydney boardriders. Day 1 was at Rainbow bay in some clean and consistent 3ft waves. Max McGuigan was our first surfer and was up against surfers from Point Lookout, Noosa and the local Sheldon Simkus from Snapper Boardriders. The crowds were a major problem on this day and unfortunately for Max, a beautiful clean barrel that he was slotted into was cut short by a free-surfer paddling into his way – this wave would have easily got Max the 5 or 6 points needed to move him into 1st place but alas it wasn’t to be; – you can see the pic of Max lining up the barrel below 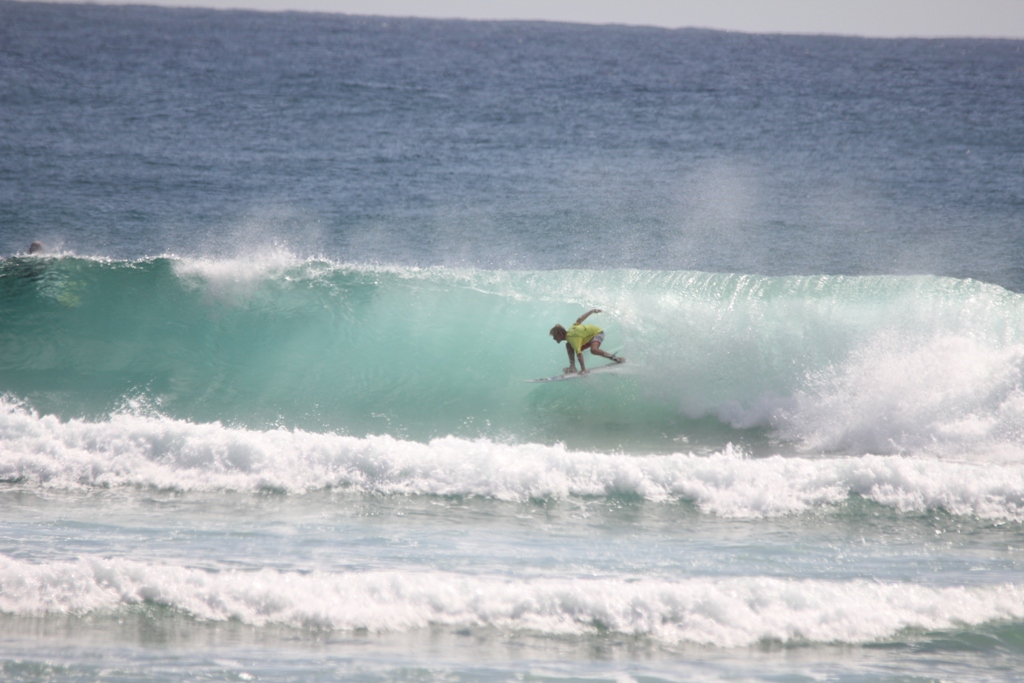 Max lining a ripper of a barrel that he traveled in for a while before running over a free-surfer and coming off – costing him a heat win. Photo (c) Mike T

Monty Tait was up next and led his heat from start to finish, winning convincingly with a series of vertical snaps, gouging hacks and barrels in true Monty style (check out the recent vimeo post from his sponsor Vissla at http://www.vissla.com/blog/our-mate-monty-tait/ ). The third surfer in the water for Southend was ex-WCT surfer Blake Thornton. As expected Blake totally ripped apart the waves he caught, and after dealing with the crowd dodging and a wave wrecking drop in, Blake finished with a 2nd just half a point away from first placed Mitch James of Kingscliff.

Day 2 was held at Kirra itself – the first time in 20 years that the Kirra Teams Challenge had been held at its namesake break. Conditions in the morning were clean and big with some surfers scoring perfect 10’s for insanely deep, long and big barrels. Karl Melo-Richards and Matt O’Rielly both surfed well but weren’t able to find a second wave with decent scoring potential to add to their total and jag themselves a 2nd place.

Day 3 was bigger again and the howling northerly was blowing straight onshore making for some massive and messy conditions with sets breaking hundreds of meters out to sea and often closing out from Greenmount right through to Tugan and draining below sea level as they hit the bank at Kirra . Joey Michaels was in first heat of the day (a big effort after the previous night out) and after his first wave, got caught in the sweep and copped a series of massive sets on the head – it took him and 2 other competitors about 20 mins to struggle back through the heavy conditions and then about another 20 to walk back up from Tugan after getting washed in.

Jackson Giles opened his heat early with a nice wave featuring a couple of big turns off the top and retained the lead through to the end to chalk up another win for the southend team. The last surfer in was Plattsy; by this time the conditions had deteriorated even further – not getting any smaller but definitely messier. Plattsy was at home in these conditions as it reminded him of messy 8ft Southend with a howling easterly that he cut his teeth on as a grommet. He opened the scoring with a nice ride but wasn’t able to find any bigger and longer walls to rip apart and was probably happy with a 3rd place and cold beer back at the southend tent afterwards.

Merewether Boardriders took out the competition followed by Coffs Harbour, Angourie and Byron Bay – so it was good to see some strength from the NSW clubs. There was plenty of swell on all three days of competition; we’ll put some of the footage up soon.

Thanks to the following surfers in the 2014 Southend Kirra team

…and team managers Matt Lawson and Pete Sgouras for organising. All the crew had a ball up at Kirra, jagged some awesome waves and epic barrels and made the most of every minute both in and out of the water.