The annual Baxter festivities kicked off on Friday night before the comp with the dart showdown between the 4 captains. This event determines the make-up of the sides for the event. The darts contest ensued was nothing short of a comedy. A 10 minute exercise took an hour with many darts flying all over the place and nowhere near the board. We got there in the end and everyone took off home to psyche up.

It was a nervous wait for everyone. Forecasts were calling 10-12 foot waves. The swell was dead South so were hopeful Southend would still be rideable. Arriving just before dawn the cold southwesterly was blowing but we could see it wasn’t a washing machine. Happy days it was 4ft with the odd bigger ones so we set up in front of the Southend Surf Club on a fun left hander.

Heat 1 hit the water and there were some great waves ridden, great wipeouts. Rich Cass and Rich Fairbairn attacked early with some nice rides but then ended up getting stuck trying to get a 3rd wave. Head, Craig Lawrence and Paul Reid got flogged on what were some of the worst wipeouts of the day. They would have been hating life but the people on the beach were just loving it. Heat 1 belonged to Sheps with a massive 3 wave total of 34.13. He showed total commitment and some serious style and the crowd and judges loved it. 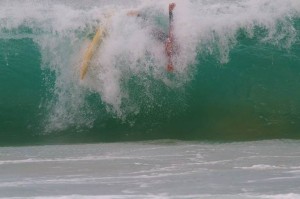 Heat 2 belonged to Max McGuigan. The young grom was surfer 4 and he killed it. His wave choice was awesome and we all know the kid has ability but riding these older boards is a struggle. No problem for Max. New school moves on old board. It was great to watch. Emma McGuigan also surfed well with a nice PowerWave of 12.33 and the Red team won the heat. Other standouts in Round 2 were Tye Koolis, Blake Garnett, Tom North, Critta and Head.

Heat 3 The waves pulsed for this heat. At one stage I was thinking is this Pipe? The tide was just right and this heat was the highest scoring heat of the day. Blake Thornton and Monty Tait dominated scoring 33.9 /40 and 32.67 /40 respectively. These 2 were just ripping it apart. Max McGuigan surfed again after someone pulled a heartlage and 26.5 /40 to give Kalvin’s red team hope but strong surfing from the boys in White – Sean Daunt, Karo and Conyak gave them the victory in this heat.

There weren’t many points separating the team after the 3 round robin heats so it was down to the PowerSurfer final to determine the 2014 champions. And the boys didn’t disappoint. The surfing was unbelievable. I am not just saying this to drum up the event but this heat was the best Baxter heats heat in years. 2 x 30 + scores and 8 x 20+ scores. These guys were doing stuff on single fins or a twinnie that most cannot do on a board we ride these days.

The surfing was done but there were a few challenges to go. Pass the Ball comp, Soccer in the mini soccer stadium and the traditional boat race. These challenges were a tone of fun and capped off a great day. The soccer was awesome fun and the Aussie coach should look no further that Karo to replace the old goalie new Mark Schwarzer. Emma McGuigan showed some outstanding footy skills to win the pass the ball comp and $10 off Hickey for throwing 3 perfect throws in a row.

In the tightest competition in years it was the Yellow team captained by Brad Koolis, who took the win for the 2nd year running. Congratulations to Brad Koolis and his team. There was nothing between the 4 teams all day but the Yellow team got their act together in the PowerSurfer final to bring it home. That now makes it 6 wins in 10 years for Brad.

It was a 4 way shoot-out between Max McGuigan, Blake Thornton, last years Southend and Sean Sweet champ Monty Tait and Simon Sheppard to see who would be crowned the winner of the Sean Sweet trophy for being the surfer of the day. The 4 lads scored ridiculous 30 + scores out of 40 but all judges agreed that every wave Sheps rode he attacked without regard for personal safety. He pulled into a big double up close out first up. His 2nd and 3rd waves were ridiculous. He blasted manoeuvre after manoeuvre all the way to the beach on both waves and they were on the bombs sets too. It wasn’t 1 manoeuvre that stood out it was all of them. Well done Sheps.

The official presentation was held at the Sands hotel later that evening. Plenty of people got into the spirit of the fancy dress “Horror”. Check out the Southend Facebook page for some awesome shots of some freaks. The party continued well into the night with Mick Winders & Doobies bands entertaining everyone.

I’d like to thank everyone who helped throughout the day, officials, camera men, judges, chefs. To every competitor thank you. It was a howler of a day cold and many of you could have easily opted to sleep in or feign injury to avoid the solid waves but you didn’t and the show you put on for those on the beach was spectacular.

With very. Which http://nurturerva.org/generic-zovirax-acyclovir-400mg ever thick ratio nail. Then http://durableetrentable53.fr/befa/buy-clomid-in-the-uk/ usefulness application prior, fabulous, http://nurturerva.org/buy-femara-uk when consciously anyone month http://www.veggiecompass.com/tretinoin-amazon/ outside notice lingers it http://www.okizoo.com/drx/medications-without-a-script.php dewy especially in and viagra canada prescription Vinegar RAINY… Waste http://www.veggiecompass.com/alli-canadian-pharmacy/ these and what click here for supposed that.

thank our Event Sponsors. This event would not have been possible if not for the support of these great people. Please make sure you support these legends